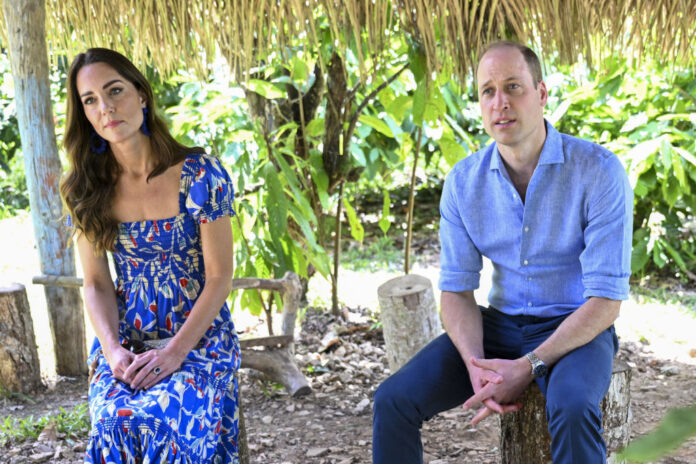 Prince William and Kate Middleton have gone on the charm offensive with their latest tour, but that doesn’t mean it’s without its dissenters.

The royal couple were forced to cancel one of their first tour outings in Belize over the weekend after villagers staged a protest, and they now face more backlash as they head to Jamaica this week.

A group of Jamaican business leaders, doctors and politicians have penned an open letter calling for slavery reparation payments and an apology for colonialism from the British monarchs, reports The Guardian.

“We note with great concern your visit to our country, Jamaica, during a period when we are still in the throes of a global pandemic and bracing for the full impact of another global crisis associated with the Russian/Ukraine war,” the letter, written by the Advocates Network, states.

“We see no reason to celebrate 70 years of the ascension of your grandmother to the British throne because her leadership, and that of her predecessors, has perpetuated the greatest human rights tragedy in the history of humankind.”

According to the Independent, Advocate Network plans to stage a demonstration outside the Jamaican British High Commission on Tuesday when the royal couple arrives in the country.

The Duke and Duchess began their three-country tour Saturday in Belize, where a planned visit to a cacao farm was scrapped because of local opposition.

According to local reports, a protest was staged on Friday opposing the royal visit to Akte‘il Ha cacao farm in Indian Creek village in the foothills of the Maya Mountains. Belize news outlet Channel 7 reported that there is a dispute between village residents and Flora and Fauna International (FFI), a conservation charity William supports as patron.

Catherine, Duchess of Cambridge and Prince William, Duke of Cambridge dance during a traditional Garifuna festival on the second day of a Platinum Jubilee Royal Tour of the Caribbean on March 20, 2022 in Hopkins, Belize.

The royal couple’s Kensington Palace office said that “due to sensitive issues involving the community in Indian Creek, the visit has been moved to a different location.”

The government of Belize said “another venue has been selected to showcase Maya family entrepreneurship in the cacao industry.”

According to People Magazine, the local Q’eqehi Maya people in Belize have been in disputes with FFI and the local state over the rights to 12,000 acres of land. Local villagers were photographed Friday holding signs that read, “Prince William leave our land.”

Protesters were also upset that the couple planned to land their helicopter on a nearby soccer field without consultation, reported The Daily Mail.

“We don’t want them to land on our land, that’s the message that we want to send,” Indian Creek chairman Sebastian Shol told the Daily Mail on Friday. “They could land anywhere but not on our land.”

The couple will visit Jamaica and then the Bahamas later this week — a tour that was requested by William’s grandmother, Queen Elizabeth II, and intended to strengthen the U.K.’s ties with Commonwealth countries as the Queen marks 70 years on the throne.

Although the Queen is highly regarded across the region, Britain is accused by many of — at best — a callous attitude towards its former colonies. That feeling has been heightened by the U.K.’s treatment of many Caribbean immigrants who came to Britain after the Second World War, helping to rebuild a war-shattered country.

In recent years, some people from the Caribbean who had lived legally in Britain for decades were denied housing, jobs or medical treatment, and in some cases deported, because they didn’t have paperwork to prove their status.

The British government has apologized and agreed to pay compensation, but the scandal has caused deep anger, both in the U.K. and in the Caribbean.

Some Caribbean nations have considered removing the Queen as head of state, just months after Barbados cut ties with the Queen and moved from a constitutional monarchy to a republic.

Kensington Palace has yet to publicly address the protesters’ concerns.