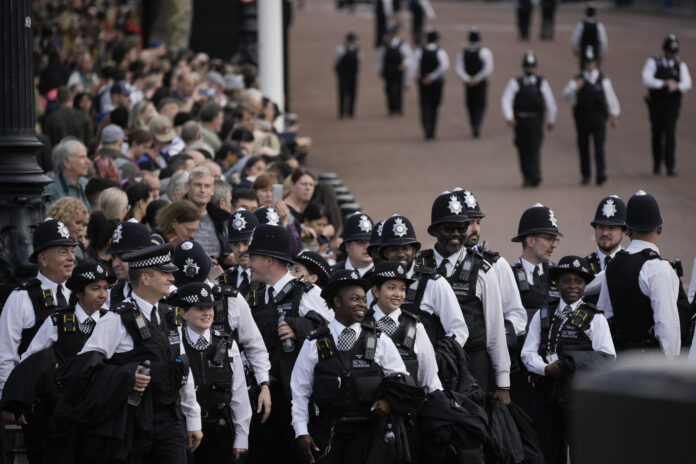 London will be welcoming many from around the world over the coming days as the United Kingdom prepares to say goodbye to Queen Elizabeth II.

From prime ministers to presidents, the funeral of the 96-year-old British monarch is expected to draw in hundreds of thousands of people to the city, with many Canadians likely to be among them.

Queen’s funeral set to be ‘largest farewell this country’s ever staged’: Royal biographer

But with an event of this magnitude, British police are faced with an “immense security challenge” that is going to be witnessed first-hand by many who are there, said Phil Boyle, an associate professor in the department of sociology and legal studies at the University of Waterloo.

“London, already being such a dense, crowded and layered city, provides or presents all kinds of security challenges, and then you add in the heads of state and all the extra security that they would require,” he told Global News.

The death of Queen Elizabeth II has been met with a wave of grief around the world. As global citizens mourn their queen, dignitaries and others are preparing to descend on London for the state funeral on Monday.

Prime Minister Justin Trudeau, Governor General Mary Simon and Canada’s High Commissioner to the United Kingdom Ralph Goodale will be among the “official mourners” from Canada, Goodale told The Canadian Press on Sept. 11. U.S. President Joe Biden and his wife are also attending the funeral, CNN reported on Monday.

Thousands of people line the streets as the coffin of Queen Elizabeth leaves Buckingham Palace, followed by King Charles lll and Royal Family members as they make their way to Westminster Hall where the Queen will lie in state on Sept. 14.

As soon as Canadians arrive at British airports, they should expect to see “heightened police presence immediately,” said Boyle.

That security presence will likely be more visible as they make their way to where the queen will be.

3:32‘I feel privileged…to say goodbye’: Thousands line up in Edinburgh to pay their respects to Queen

‘I feel privileged…to say goodbye’: Thousands line up in Edinburgh to pay their respects to Queen

Canada announces a holiday to mark Queen Elizabeth’s death. Here’s who gets it

For her lying in state, visitors will go through “airport-style security” and there are “tight restrictions” on what you can take in, the British government said on Monday. The lines to see the queen’s coffin are expected to be exceptionally long. Police may conduct security searches along parts of the queue.

Those who get to see the queen lying in state are only allowed to carry a small bag, officials said. Water bottles, food, flowers are among the items not allowed inside Westminster Hall during the lying in state.

Queen Elizabeth’s lying in state in Westminster: Here’s what to know

Britain’s Civil Aviation Authority said on Tuesday that it has introduced airspace restrictions covering Elizabeth’s funeral as part of the overall security arrangements. It had published two restrictions so far, with an additional central London and Windsor restriction set to be issued.

On Sept. 9, London police said the public will begin seeing additional officers posted outside key locations like transport hubs, Royal Parks and outside Royal residences in London. Road closures are being introduced at several locations in Westminster.

“Although we recognize these road closures may cause some inconvenience, they are necessary to ensure the safety of those members of public visiting London and to allow the planned ceremonial events to take place,” the force said.

“We will be keeping people safe with highly visible patrols across London.”

London, being one of the oldest cities in the world, has seen its fair share of major events. While the death of a monarch is likely novel for many people, there have been occasions where security has had to be increased to handle major crowds, Boyle said.