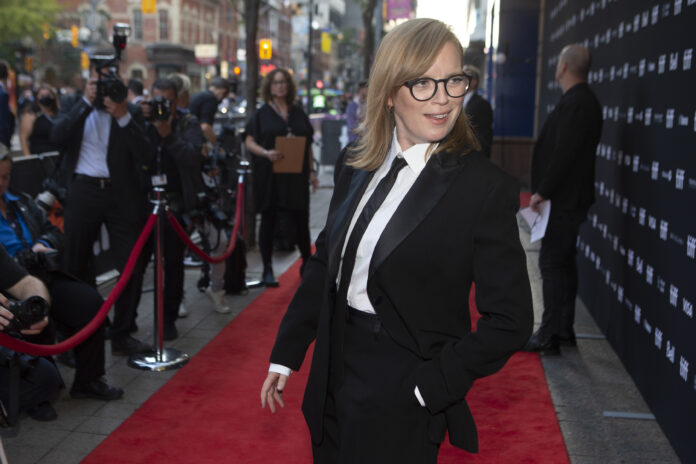 TORONTO — Over a career that has taken her from child actor to the director’s chair, Canadian filmmaker Sarah Polley has spent enough time on set to have a feel for the standard rhythms of a shoot.

But there was something different about the female-led production of “Women Talking,” Polley said, of the first feature she has directed in more than a decade.

Tasks that would typically take 45 minutes would be done in seven, with crew members holding competitions to see who could help set up a shot the fastest, she recalled.

From the stars to the grips, everyone on the call sheet seemed to be galvanized by a sense of collective mission that went beyond adding another credit to their resume, Polley said.

‘The People’s Joker,’ reimagining of Gotham City, pulled from TIFF over rights issues

“We felt like we were part of a movement, not a movie,” Polley said in an interview after the world premiere of “Women Talking” at the Toronto International Film Festival this week.

“There’s something essential that we feel is a conversation that should be part of our world, and we want to be part of it with every part of our being.”

Adapted from Manitoba author Miriam Toews’ 2018 novel of the same name, “Women Talking” centres on a small group of Mennonite women who convene in a hayloft to discuss how to respond to a pattern of sexual assaults by the men in their remote religious colony.

Rooney Mara, Claire Foy and Jessie Buckley are part of the ensemble that plays out this fractious debate, wrestling with questions of faith, forgiveness, justice and healing as they determine whether the women in the community should stay and fight or pack up and leave.

Many of their arguments echo the broader discourse about sexual violence that’s been simmering since the #MeToo movement.

Anna Kendrick, others rescued from stuck elevator during TIFF

It’s an issue that had personal resonance for many people involved in the production, some of whom shared their perspectives to help shape everything from the script to the blocking of a scene, Polley said.

“We’re in the process of that conversation all the time, and that inevitably made its way into the film,” said Polley, whose previous directing credits include 2011’s “Take This Waltz” and 2006’s “Away from Her.”

“Women Talking” star and producer Frances McDormand has described the cast and crew behind the film as “a matriarchal production team.”

In the male-dominated film industry, Polley said she was grateful for the opportunity to collaborate with so many talented women, but noted that people of all genders helped bring the film’s conversation to the big screen.

“Everyone on the cast and crew came to this in such a generous spirit,” she said. “It wasn’t just the women on set who wanted to bring those experiences of abuse and of feeling powerless, and of moving through it and a building a better life and hopefully a better world.”

“Women Talking” is slated to hit theatres on Dec. 2.