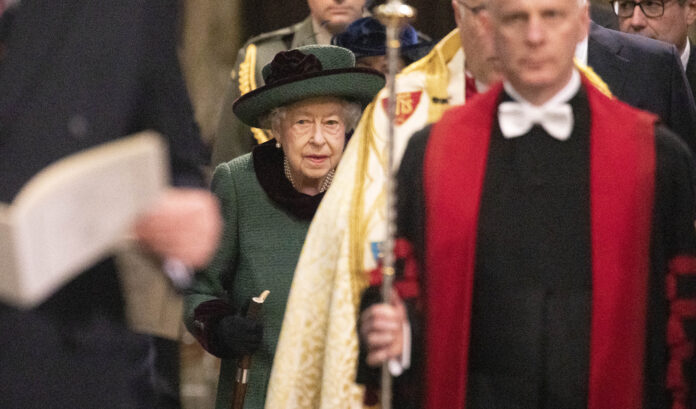 After a five-month hiatus, Queen Elizabeth II made her return to the public eye Tuesday to attend a memorial service in honour of her late husband, Prince Philip.

Philip, the Duke of Edinburgh, died last April at the age of 99. He and the Queen had been married for 73 years.

Due to the COVID-19 pandemic, only 30 people were able to attend his funeral service last year.

Queen Elizabeth II and Prince Andrew, Duke of York leave after attending the Thanksgiving service for the Duke of Edinburgh at Westminster Abbey on March 29, 2022 in London, England.

But Tuesday’s service at London’s Westminster Abbey was a much bigger event, with approximately 1,800 family members, friends, foreign leaders and other dignitaries in attendance.

Elizabeth, who recently recovered from COVID-19 and has been sidelined in recent months due to “mobility issues,” opted to take the shortest walking route into Westminster Abbey, reports The Associated Press.

However, she was spotted holding onto the arm of her second son, Prince Andrew, as he escorted her into the church, which sparked some criticism following his recent settlement with his sexual assault accuser Virginia Giuffre.

Queen Elizabeth II and Prince Andrew, Duke of York leave after attending the Thanksgiving service for the Duke of Edinburgh at Westminster Abbey on March 29, 2022 in London, England.

Her choice of escorts, according to some royal watchers, is seen as a vote of support for Andrew after he became embroiled in controversy due to his relationship with the late, convicted sex offender Jeffrey Epstein.

The Rev. David Conner remembered Philip’s service to the Queen, dedication to environmental protection and commitment to equipping young people with the skills they need to succeed through his Duke of Edinburgh Award.

“Through his passionate commitment, he drew others to himself in admiration and respect and, in the case of those who lived and worked most closely to him, genuine love,” Conner said.

There were also subtler honours, delivered as the royals often do through their clothing choices. Elizabeth, her daughter, Princess Anne, and Camilla, the Duchess of Cornwall, were all dressed in dark green, echoing Philip’s livery colour of Edinburgh Green.

Also wearing green was Doyin Sonibare, 28, who won top honours from the Duke of Edinburgh Award, which was created by Philip to teach young people confidence and life skills through outdoor activities and community service. More than 6.7 million teenagers and young adults have taken part in the program since 1956.

The Duke and Duchess of Cambridge attended the service with their two eldest children, Prince William and Princess Charlotte. It was their first event following their contentious Caribbean tour, where they faced protests and criticism for the British Royal Family’s role in colonialism.

The service was brief — Philip hated a fuss — with the Queen walking out of the church less than 50 minutes after she walked in. It did give Britain a chance to offer a note of thanks to the man who at the Queen’s coronation in 1953 swore to be her “liege man of life and limb.”

It was also a family occasion, showing that the Windsors will stick together even through the rough patches.

5:56Queen Elizabeth reflects on the loss of Prince Philip during annual Christmas message