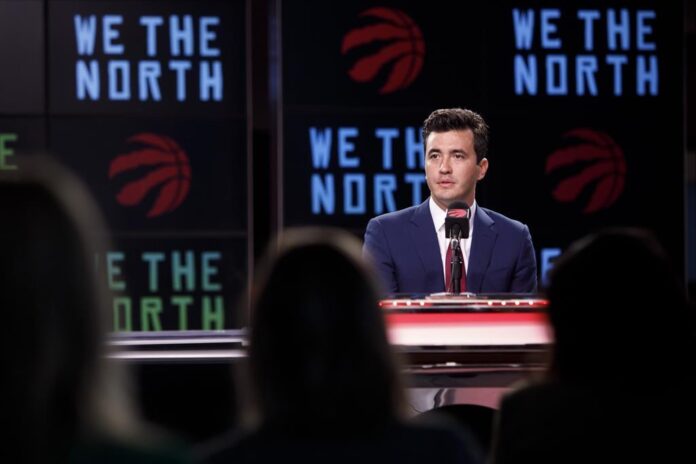 TORONTO – Settling into his seat on the podium at the Toronto Raptors’ pre-draft media availability Tuesday, general manager Bobby Webster couldn’t help but open with a quip.

Unlike last year when the Raptors hit a home run by taking Scottie Barnes with their lottery pick, the buzz has been rather muted ahead of Thursday’s NBA draft in Brooklyn.

Toronto traded its first-round pick earlier this year and will have just one second-round selection at No. 33 overall. The Raptors have had some success with picks in that range in the past and are hoping they’ll be able to do it again.

“I think back to some of the prior drafts obviously Pascal (Siakam) at 27, I think OG (Anunoby) was 23, Delon (Wright) at 20, even Malachi (Flynn) at 29, so I think we’ve always operated in this space,” Webster said. “I think last year was probably the year that was a bit different being in the top five.

“So I think we’re kind of attuned to (the fact) there’s going to be guys in this range, it’s obviously our job to find them.”

4:54Raptors all-star Fred VanVleet makes difference on and off the court

The Orlando Magic have the first overall pick this year. Auburn’s Jabari Smith Junior, Gonzaga’s Chet Holmgren and Duke’s Paolo Banchero are in the mix to go No. 1.

Oklahoma City, Houston, Sacramento and Detroit round out the top five in the draft order.

This is the first time in three seasons that the Raptors have been able to do their preparation and player workouts in Toronto. In 2020, virtual meetings were required due to the COVID-19 pandemic and last year the team had to work out of its temporary home in Tampa, Fla.

Webster said the Raptors had 12 six-man workouts ahead of this year’s draft, with the last few days devoted to meetings and final deliberations.

“I think we felt that between 20 and 25 guys (on their main list), usually you’ll have one of those guys there at 33,” he said. “So that’s kind of the task now. Can we get to that group that we feel really comfortable with and we’re fairly confident will be there at 33.”

A notable early second-round Toronto pick came in 2006 when the Raptors selected guard P.J. Tucker at No. 35. The veteran swingman has enjoyed a long career and is coming off a solid season with the Miami Heat.

“I think it’s always going to be best available (player),” Webster said of the team’s selection process. “Maybe more it’s a type of player as opposed to position. We know (we’d like) versatile, defensive (players) and if they can make a shot, great. But looking at those type of players typically.”

Barnes won the NBA rookie of the year award after averaging 15.3 points and 7.5 rebounds a game last season. He helped Toronto finish fifth in the Eastern Conference standings at 48-34 before falling to Philadelphia in the first round of the playoffs.

Toronto gave up its first-round pick last February in a deal to acquire Thaddeus Young from the San Antonio Spurs.

The Raptors had two second-round picks last year. Toronto native Dalano Banton was selected at No. 46 and David Johnson was next at No. 47.

“I think the draft is that great unknown and I think that’s why people spend so much time (on it),” Webster said. “Because if you can get a really good player in the second round that becomes an all-star, the value there is basically immeasurable.”

Webster was also asked about recent trade rumours involving Anunoby, but declined to comment on any speculation.

“If we talked about every call we got or player that was discussed we’d be here for hours,” he said during the 15-minute availability at the OVO Athletic Centre. “So I don’t think it’s all that noteworthy.”

Two Canadian players could crack the top 10 in this year’s draft.

Montreal’s Bennedict Mathurin and Shaedon Sharpe of London, Ont., are both forecast to be lottery selections in many mock drafts.

This report by The Canadian Press was first published June 21, 2022.