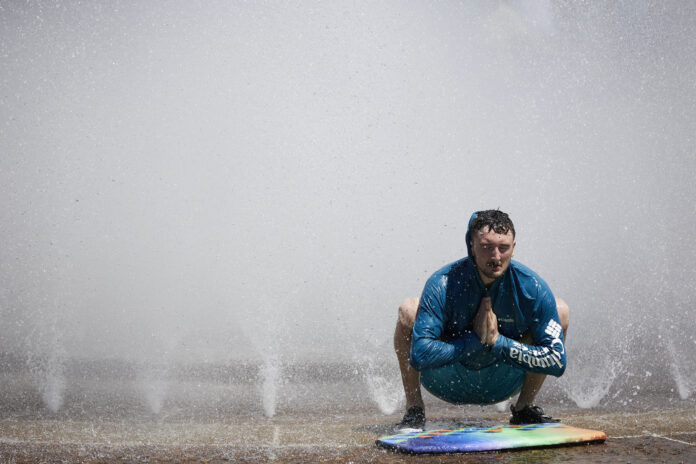 Free transportation to cooling centers and garbage pickup well before sunrise were among the steps being taken in the Pacific Northwest as the region hit the peak of a multiday heatwave.

In Portland, temperatures soared to 102 degrees Fahrenheit (38.9 Celsius) in Oregon’s largest city on Tuesday, which was expected to be the hottest day of a scorching spell that will be unusually long for this part of the United States.

It was also a new daily record for the city for July 26, besting the previous mark set in 2020.

Oregon governor Kate Brown declared a state of emergency across much of the state, warning that extreme temperatures may cause utility outages and transportation disruptions.

Temperatures aren’t expected to cool in western Oregon and Washington until the weekend.

1:35Heat warnings in place for most of British Columbia

Heat warnings in place for most of British Columbia

Under the sweltering heat, Matthew Carr spent his lunch break in a fountain in downtown Portland. The 57-year-old works outside picking up trash for the city and had to find a way to cool off.

“This is pretty hot,” Carr said. “I can just take my uniform off, jump in there with my shorts for my break, and hang out for a good 10 or 15 minutes.”

Oregon health officials say there has been an uptick in the number of people reporting heat-related illness in emergency departments, and the number of those calling emergency services numbers for similar symptoms.

He said there were 32 such visits to emergency rooms on Monday compared to three to five per day before the heat wave began.

Portland officials have opened cooling centers in public buildings and installed misting stations in parks. TriMet, which operates public transportation in the Portland metropolitan area, will allow passengers who cannot afford fares to ride for free when heading to cooling centers.

4:34How to prepare and stay healthy during B.C.’s latest heatwave

How to prepare and stay healthy during B.C.’s latest heatwave

Most of Portland’s garbage companies began earlier pick-ups on Tuesday morning, starting as early as 4 a.m. to reduce drivers’ exposure to heat and health risks. The early rounds will likely continue through Friday morning.

Multnomah County, which includes Portland, planned to open four overnight emergency cooling shelters starting Tuesday night so people who can’t get cool on their own could spend the night. The locations can accommodate a total of 245 guests, said Multnomah County spokesperson Kate Yeiser.

“We’re going to find space for anybody who needs it,” said Yeiser, adding that the sites have a “no-turn-away policy.” She said the county may open an additional overnight center on Wednesday if there’s high demand.

Many libraries are extending their hours, staying open until 8 or 9 p.m., to allow people more time to cool off.

Residents and officials in the Northwest have been trying to adjust to the likely reality of longer, hotter heat waves following last summer’s deadly heat dome weather phenomenon that prompted record temperatures and deaths.

In response, Oregon passed a law requiring all new housing built after April 2024 to have air conditioning installed in at least one room. The law already prohibits landlords in most cases from restricting tenants from installing cooling devices in their rental units.

About 800 people died in Oregon, Washington and British Columbia during a 2021 heat wave that hit in late June and early July. The temperature at the time soared to an all-time high of 116 F (46.7 C) in Portland and smashed heat records in cities and towns across the region. Many of those who died were elderly and lived alone.

While temperatures this week are not expected to get that high, the anticipated number of consecutive hot days has raised concerns among officials.

The National Weather Service has issued an extreme heat warning for large swaths of Oregon and Washington state.

Officials in Seattle and Portland have issued air quality advisories from Tuesday through Saturday, warning that smog may reach levels that could be unhealthy for sensitive groups.

Cooling sites are open throughout Seattle, greater King County and throughout western Washington.