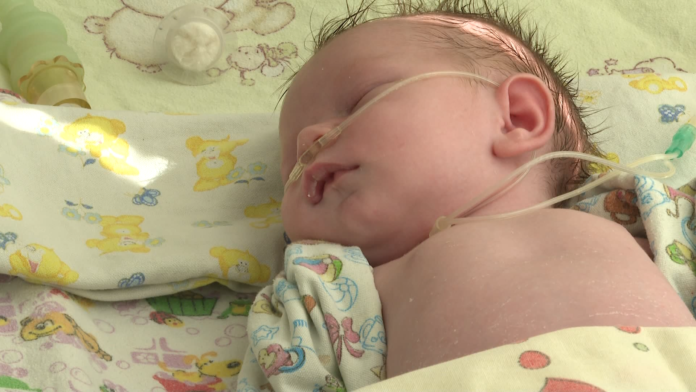 Baby’s cries echo through the dimly-lit narrow hallways of a children’s hospital in Odesa, Ukraine. And a couple of times each day, the sound is drowned out by another noise: air raid sirens.

The hospital is located about 130 km west of the frontline in southern Ukraine, where Russian forces are battling for control of Mykolayiv. If that city falls, many expect Odesa will be Vladimir Putin’s next target.

A baby born prematurely receives treatment at the Odesa Regional Children’s Clinical Hospital in southwestern Ukraine. Hospital staff feared the city could be Russia’s next target.

For weeks, Russian ships have been spotted hovering on the horizon off the coast of the historic Black Sea port city, their silhouettes barely visible. There has been occasional shelling and air strikes in the area, reportedly killing dozens of people, but the city centre is so far largely unscathed.

Russian warships are barely visible on the horizon off the coast of Odesa, Ukraine, in the Black Sea.

In recent days, staff at the Odesa children’s hospital have watched their television screens in horror at images of bombed schools, a theatre and even a maternity hospital in the port city of Mariupol.

“I just want to cry. I just want to shout to other countries to please help us,” said Tatiana Pokatilova, who runs the children’s hospital. She says some of their patients just arrived after escaping the fighting in Mykolayiv, including a newborn.

1:42Russia-Ukraine conflict: Odesa turns to network of tunnels to shelter from looming attack

Russia-Ukraine conflict: Odesa turns to network of tunnels to shelter from looming attack

Despite those heightened anxieties, the hospital is operating as normal, with one notable exception: When they hear the sirens warning of a possible Russian strike, the staff hurry their patients downstairs into a series of tunnels and bunkers buried beneath the hospital.

The space, previously used for storage, has now been converted into fortified hospital rooms. Beds on wheels are lined up side-by-side. Blankets and boxes of supplies are stacked against the wall. In an adjacent room, a movie projector and screen have been set up.

A basement bunker below a children’s hospital in Odesa, Ukraine, has been converted into fortified hospital rooms.

“We play films so the children can’t hear the bombs,” Pokatilova told Global News. “We are better protected down here, but we would not withstand a direct hit.”

One of the hospital’s patients, 12-year-old Mark, suffers from a rare lung disorder. A machine attached to a tube in his throat helps him to breathe. He lies on his side in a hospital bed, scrolling through Spider-Man video clips on his smartphone. The phone has a Spider-Man cover and he’s wearing a Spider-Man t-shirt.

12-year-old Mark relies on a breathing machine. His mother wants to leave Ukraine, but they require special equipment and transportation out of the country.

Mark’s mother, Christina, sits on the foot of his hospital bed with a distant, worried expression. Many of their friends and family have already fled the country, she said.

“We are desperate to leave, but my son requires special treatment, equipment and transportation. We’re trapped here until we can find a safe way out,” she told Global News.

Even the walk down two flights of stairs from Mark’s hospital room to the bunker can be difficult. The last time the air raid siren sounded, staff disconnected his breathing machine and helped him down to the basement. He vomited and was struggling to breathe.

But for the hospital’s most vulnerable patients, moving into the protection of a basement bunker is not an option. The neonatal intensive care unit is currently treating about a dozen sick newborns. Most were born prematurely. One baby, whose piercing screams can be heard down the hall, just had stomach surgery. Their beds, equipped with endotracheal tubes, monitors and machines, are not portable.

“These babies cannot be moved into the shelter, because they rely on this equipment,” Dr. Lyudmula Patronymic said. “They would not survive.”

She and her nine colleagues were offered the choice: When the air sirens sound, go down into the basement or stay on the ward on the third floor with the babies, exposed. All of them chose to stay.

“How could someone destroy a hospital like the one in Mariupol,” Patronymic says. “There are no words.”