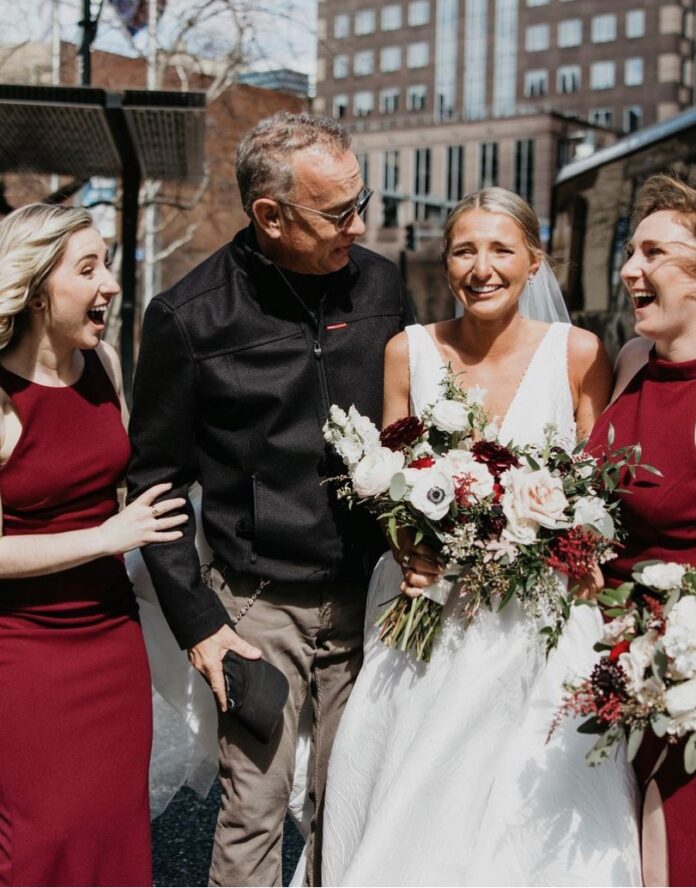 Weddings, just like life, are like a box of chocolates: you never know what you’re going to get.

Or at least that was true for one stunned bride who unexpectedly met Oscar Award-winning actor Tom Hanks on her wedding day Saturday.

While taking photos with her bridal party outside their hotel in Pittsburgh, bride Grace Gwaltney said their session was interrupted when Hanks, 65, approached to introduce himself and congratulate the bride.

Hanks is in Pittsburgh currently filming the movie A Man Called Otto, where he is set to play an elderly man who befriends his neighbours.

“At first I thought it was a random person on the street just wanting to say congratulations, but when I heard, ‘Hey, I’m Tom Hanks,’ I immediately froze and just became speechless,” Gwaltney told Good Morning America.

Gwaltney said she and her bridal party were in “disbelief.”

Rowland told Good Morning America, “He just came up, very jovial, happy, exactly what you would think Tom Hanks would do.”

Wedding crashing appears to be a thing for Hanks, as this is not the first time he’s done it. The actor also appeared at a beach wedding in October 2021, where he surprised married couple Diciembre and Tashia Farries.

In 2016, Hanks was photographed at yet another wedding, this time in New York City’s Central Park. He also offered to officiate for the bride and groom, though they declined.

According to the Daily Dot, Hanks even wedding crashed as far back as 1993, while filming Forest Gump in Beaufort, S.C.

Hanks was again spotted in Pittsburgh by a mother and son while filming the new movie near their home earlier this week. Hanks waved and spoke briefly to mother Ashley Glass and her two-year-old son, Charles.