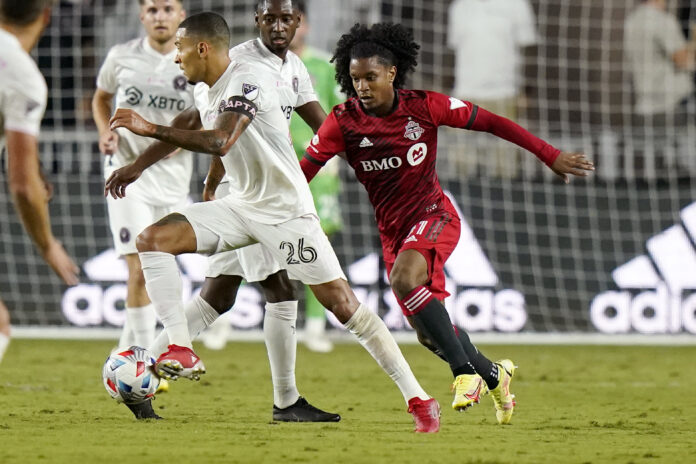 BRAMPTON, Ont. — Once a Coyote, always a Coyote.

Toronto FC teenage midfielder Jayden Nelson lived up to that credo this week when he returned to Copeland Public School to fund a snacks programs for its students.

For the 19-year-old Nelson, who attended Grades 1 through 5 at Copeland, it’s a chance to share with his fellow Coyotes “the blessing that I have.” For the young students in attendance, Monday’s gathering was an opportunity to see anything is possible — even in their own backyard.

“He would have sat exactly where they sit right now,” said principal Leanne Rathbone. “To see a former Coyote have a dream and follow through is very exciting. And then to have that thought to give back to Brampton youth and think of his own school is really inspiring.”

“To the young people here, that are witnessing this, I want you to remember how important it is to dream big,” said Kathy McDonald, school trustee for the Peel District School Board.

“Look at who we have sitting here today. A Coyote,” she added. “So anything is possible. Never ever let anyone steal your joy. And always believe in yourself and work really really really hard.”

The elementary school brought out all the stops for its star alumnus.

Three front windows were decorated with a sign that said “Welcome Back Jayden,” next to his Toronto FC jersey. An honour guard of pint-sized students, on greeting duty, nervously awaited his arrival.

Inside, near the school entrance, a display showed off Nelson’s class photos and other school memorabilia.

“This is crazy,” Nelson said as he enthusiastically checked out photos of his past, from his first day at school to his first mohawk hairdo.

The school even handed out cookies in the form of a red TFC jersey, with Nelson’s name and No. 11.

Monday’s ceremony was one of the first student gatherings in the gym since the pandemic started, Rathbone noted. While some 550 kids attend the school _ with some 475 currently back in the building _ the event was restricted to Grade 5 students and some of those in the school’s before- and after-school programs to keep the numbers down.

In true Coyote fashion, the kids in attendance howled their appreciation when prompted. Nelson was also honoured with a “Howl Award” certificate for outstanding citizenship and a school pin that goes to special students.

Just being back in the gym was a trip down Memory Lane for Nelson, who was accompanied by his mother Pethroina Vidal, brother Kent, his grandparents and his sister’s boyfriend.

“Believe it or not I used to play a lot of basketball. So I remember playing basketball in this gym,” said the five-foot-seven 148-pound Nelson. “I made a lot of friends here as well that I’m still friends with to this day. So everything started here. That’s why it’s very close to my heart and that’s why I’m doing this for this school.”

“Be Awesome,” read one sign on the gym wall. Another detailed Skipping Club rules, ranging from “No sliding in the gym” to “Most important rule of all _ Have fun!”

Nelson was greeted with video messages from former teachers and later toured the school, visiting various classrooms to interact with the kids.

The snacks program was discontinued during the pandemic with many students studying online and limited opportunities to raise funds. Nelson made an initial $1,000 donation to relaunch the program with ATG Sports Management, which represents him, contributing an additional $500.

Nelson, whose salary was US$106,585 last season, has pledged to further support the program with monthly donations for the 2022-23 school year.

“This is just the beginning of something much bigger than just soccer,” he told his young audience.

A young Nelson was once a beneficiary of PLASP (Peel Lunch and After School Program) which helps look after young kids from as early as 7 a.m. and as late as 6 p.m. The expanded PLASP program is now available in more than 240 locations in Toronto and Peel Region.

Nelson’s generosity has been matched by others, with the YMCA Student Nutrition Program also contributing funds.

Vidal watched with pride as her son took centre stage. “I was definitely crying,” she said later.

She said Nelson has shown an interest in others from an early age, detailing a trip to the Caribbean when he begged her to buy some wilted tomatoes from a child vendor.

“Jayden knew that it wasn’t the tomato. It was just giving back,” she said. “And it just always has been a thing for him.”

Brampton has been very good to the Canadian soccer team.

Nelson has had a dizzying soccer run in a short time, with plenty of promise for the future.

In 2019, he made his pro debut with Toronto FC 2 in April, turned 17 that September, represented Canada at the FIFA U-17 World Cup in November and was named Canadian Youth International Player of the Year in December. The same day he learned of the award, he got a call from Herdman inviting him to a camp in January

He signed with TFC’s first team as a homegrown player in January 2020, 16 days after making his senior debut for Canada and 13 days after scoring his first goal in a pair of 4-1 wins over Barbados.

“Jayden has all the tools to be a top player,” TFC’s then-GM Ali Curtis said at the time. “He’s only 17, so we need to be measured with his development, but we believe he can be a very important player for both club and country.”

Earlier this month, Nelson opened his MLS scoring account with a highlight-reel goal that secured Toronto a 2-2 tie at Real Salt Lake. After stealing the ball off RSL captain Damir Kreilach, Nelson looked up, saw goalkeeper Zac MacMath was out of position and fired it home from 35 yards-plus in the 79th minute

Nelson, who has won three caps at the senior level for Canada, was suspended for Toronto’s 5-4 road loss Sunday to New York City FC after being handed a one-game ban by the MLS Disciplinary Committee for a challenge on Kai Wagner in a 2-1 win over the Philadelphia Union the previous week. TFC hosts FC Cincinnati on Saturday.