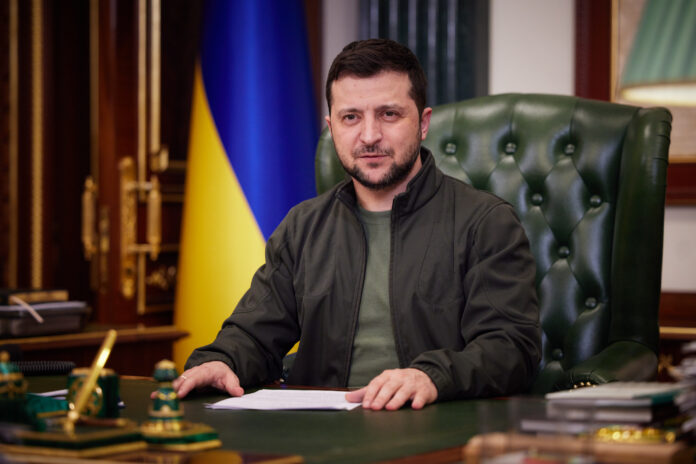 Ukraine is prepared to discuss adopting a neutral status as part of a peace deal with Russia but such a pact would have to be guaranteed by third parties and put to a referendum, Ukrainian President Volodymyr Zelenskyy said in remarks aired on Sunday.

Zelenskyy was speaking to Russian journalists in a 90 minute video call, an interview that Moscow authorities had pre-emptively warned Russian media to refrain from reporting. Zelenskyy spoke in Russian throughout, as he has done in previous speeches when targeting a Russian audience.

Zelenskyy said Russia’s invasion had caused the destruction of Russian-speaking cities in Ukraine, and said the damage was worse than the Russian wars in Chechnya.

“Security guarantees and neutrality, non-nuclear status of our state. We are ready to go for it. This is the most important point,” Zelenskyy said.

Zelenskyy said Ukraine refused to discuss certain other Russian demands, such as the demilitarization of the country.

Speaking more than a month after Russia invaded Ukraine on Feb. 24, Zelenskyy said no peace deal would be possible without a ceasefire and troop withdrawals.

He ruled out trying to recapture all Russian-held territory by force, saying it would lead to a third world war, and said he wanted to reach a “compromise” over the eastern Donbass region, held by Russian-backed forces since 2014.

Russia says it is conducting a “special military operation” in Ukraine with the aim of demilitarizing its neighbor. Ukraine and its Western allies call this a pretext for an unprovoked invasion.

Zelenskyy focused on the fate of the eastern port city of Mariupol, under siege for weeks. Once a city of 400,000 people, it has undergone prolonged Russian bombardment.

“All entries and exits from the city of Mariupol are blocked,” Zelenskyy said. “The port is mined. A humanitarian catastrophe inside the city is unequivocal, because it is impossible to go there with food, medicine and water,” he said.

“I don’t even know who the Russian army has ever treated like this,” he said, adding that, compared to Russian wars in Chechnya, the volume of destruction “cannot be compared.”

Sick babies and bomb shelters: How a children’s hospital in Ukraine is protecting its most vulnerable patients

Russia has denied targeting civilians in Ukraine. Russia and Ukraine have traded blame for a failure to open humanitarian corridors.

Zelenskyy pushed back against allegations from Moscow that Ukraine had curbed the rights of Russian speakers, saying it was Russia’s invasion that wiped Russian-speaking cities “off the face of the earth.”

He also dismissed as “a joke” allegations made by Russia that Ukraine had nuclear or chemical weapons.