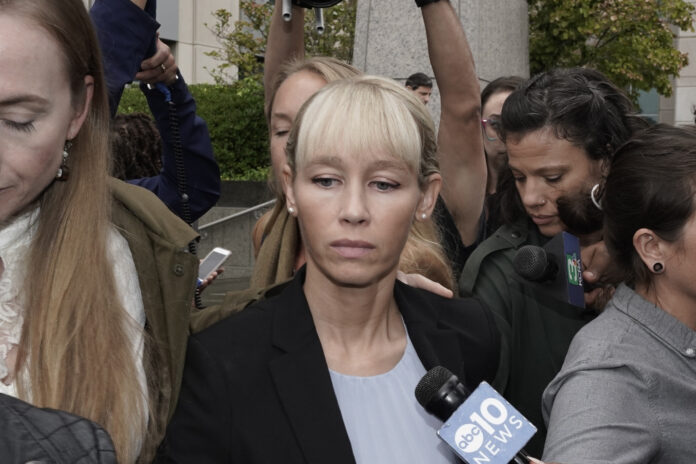 A Northern California woman who faked her own high-profile kidnapping has been sentenced to 18 months in prison, more than double the time that federal prosecutors recommended, for orchestrating the elaborate hoax and fraudulently collecting state funds earmarked for victims and disabled people.

Sherri Papini, 40, went missing in November 2016 after going for a run and turned up three weeks later on the side of a freeway with multiple injuries, including a brand on her right shoulder.

Investigators searched for more than four years for two Hispanic women that Papini claimed had kidnapped and tortured her.

Earlier this year, the FBI discovered that the mother of two had actually been staying with an ex-boyfriend for the period of time she was supposedly detained, and that the wounds she was found with were self-inflicted.

Papini pleaded guilty to two counts of mail fraud and making false statements as part of a plea deal in exchange for her confession. She was initially charged with 35 felonies.

Papini was sentenced to a year and a half in prison by U.S. District Court Judge William Shubb, with three years of supervised release following the completion of her sentence. After emerging from the courtroom, Papini embraced her friends and family in tears.

Federal prosecutors had recommended that Papini serve only eight months in prison and her defence attorneys had requested that only one month be spent behind bars with the remaining seven months being served in home detention.

Shubb concluded that both sentencing recommendations were insufficient, and reasoned that Papini would likely still be perpetuating the hoax that she was kidnapped had she not been found out by the FBI.

“Papini planned and executed a sophisticated kidnapping hoax, and then continued to perpetuate her false statements for years after her return without regard for the harm she caused others,” prosecutors wrote in their sentencing memo.

“As a result, state and federal investigators devoted limited resources to Papini’s case for nearly four years before they independently learned the truth: that she was not kidnapped and tortured.”

“Papini caused innocent individuals to become targets of a criminal investigation,” prosecutors added. “She left the public in fear of her alleged Hispanic capturers who purportedly remained at large.”

Papini additionally wasted state resources during the initial three-week manhunt for her and also fraudulently collected more than US$300,000 in Social Security disability income, assistance from the California Victim Compensation Board, and through a GoFundMe created on her behalf.

Shubb ordered Papini to pay $309,000 in restitution for the money she fraudulently amassed but acknowledged that the sum would likely never be paid back.

“I would ask rhetorically, who is going to employ her in the future?” Shubb said.

Before the sentencing, Papini publicly apologized to the court for lying for so many years, saying, “I am choosing to humbly accept responsibility.”

“What was done cannot be undone. It can never be erased. I am not choosing to stay frozen like I was in 2016. I am choosing to commit to healing the parts of myself that were so very broken.”

Papini was reported missing in 2016 by her husband, Keith Papini, who has since filed for divorce.

“The events of the past two months have been shocking and devastating,” said Keith Papini in a statement released after the sentencing hearing.

“My current focus is on moving on and doing everything I can to provide my two children with as normal, healthy and happy of a life as possible.”

“That Sherri could intentionally mislead her own beautiful children, her devoted husband, Keith, our families, the authorities, and all of you for so long is beyond comprehension and was done for reasons for which only she is aware,” Koester wrote in a Facebook post.

“Sadly, despite what she has expressed to the media, she feels no remorse or guilt for the untold damage she has caused nor for taking advantage of critical criminal, financial, and mental health resources that should have gone to help real victims in need. It deeply pains me to say this, but my sister is very disturbed, and I hope, for her children’s sake, once she is released, she will finally get the treatment she clearly so desperately needs,” Koester added.

Papini’s lies started to unravel in 2020 when authorities tested some of the male DNA that was found on her clothes when she turned up after being missing. The DNA was a match for a family member of Papini’s ex-boyfriend, leading investigators to interview her former partner.

The ex-boyfriend confirmed to authorities that Papini asked him to pick her up from her home and stayed with him during the period she was missing. His account was verified with cellphone records obtained by investigators that showed secret communication between the two as early as December 2015, according to court filings.

A cousin of Papini’s former boyfriend also corroborated the story, saying he saw Papini twice, unrestrained, in the ex-boyfriend’s apartment.

Papini declined to answer questions from reporters as she entered and exited the courthouse on Monday. She has been ordered to turn herself in to begin her prison sentence by 2 p.m. local time on Nov. 8.

0:41Man beats himself up, fakes own kidnapping to get out of work