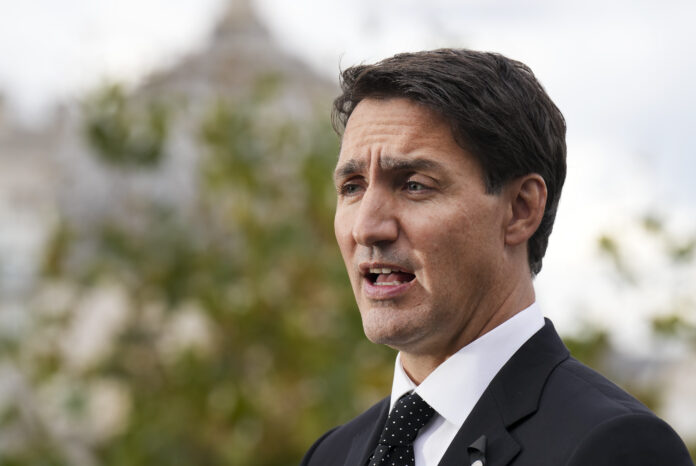 A likely jetlagged Justin Trudeau is shifting gears from mourning a monarch to making the world safer for democracy – and it’s only Tuesday.

The prime minister finds himself in New York City Tuesday morning for the start of the leader-level debates at the 77th General Assembly of the United Nations.

Trudeau arrived in the U.S. late Monday after a long day that included attending the London funeral of Queen Elizabeth in person.

Trudeau, ministers to attend 77th Session of the U.N. General Assembly next week

His UN agenda is laden with meetings on subjects close to his heart: climate change, gender equality and sustainable development, among others.

He’ll also take part in a roundtable with former secretary of state Hillary Clinton on the virtues of inclusive job growth.

Russian President Vladimir Putin’s war in Ukraine is sure to permeate every discussion about economic growth and food security – two other Trudeau priorities.

And if the words of Secretary-General Antonio Guterres are any indication, this year’s gathering will be seized with an urgent sense of crisis.

“The General Assembly is meeting at a time of great peril,” Guterres said last week as the gatherings got underway.

1:20‘The sun has set on a most extraordinary reign’: United Nations pays tribute to Queen Elizabeth II

‘The sun has set on a most extraordinary reign’: United Nations pays tribute to Queen Elizabeth II

The war in Ukraine is entering its eighth month as the conflict’s economic and social consequences continue to echo around the world.

The lasting effects of COVID-19 continue to hit hardest among the world’s poor, Guterres said, even as climate change reshapes the face of the planet in tragic and disturbing ways.

He described a recent visit to flood-ravaged Pakistan, where staggering monsoon rains have killed more than 1,500 people, injured more than 12,700 and destroyed more than 1.8 million homes.

“What is happening in Pakistan demonstrates the sheer inadequacy of the global response to the climate crisis, and the betrayal and injustice at the heart of it,” Guterres said.

“Whether it is Pakistan, the Horn of Africa, the Sahel, small islands or least-developed countries, the world’s most vulnerable – who did nothing to cause this crisis – are paying a horrific price for decades of intransigence by big emitters.”

Violent, extremist rhetoric is also proliferating virtually unchecked online, Guterres said, while in some parts of the world, the fight for gender equality is going in the wrong direction.

“Our world is blighted by war, battered by climate chaos, scarred by hate, and shamed by poverty, hunger and inequality.”

He described how traditional UN values are being “devoured by the acids of nationalism and self-interest,” including political figures “who play to people’s worst instincts for partisan gain.”

And he singled out a global financial system “that penalizes those with the least” and a fossil fuel industry that’s “killing the planet to rake in the most.”

Trudeau’s two-day agenda will include work on advancing the 17 goals of the United Nations’ sustainable development effort, of which Trudeau is a co-chairman.

Trudeau will take part in the “Christchurch Call Summit” with New Zealand counterpart Jacinda Ardern and French President Emmanuel Macron, an effort to confront the online spread of violent extremism.

And he’ll be on hand for events previewing COP15 meetings on biological diversity that are scheduled to take place in Montreal in December.

On Wednesday, Trudeau will attend a pledging conference for the Global Fund to Fight AIDS, Tuberculosis and Malaria, to which Canada has pledged $4 billion since 2002.

Advocates in Canada have been urging the prime minister to commit an additional $1.2 billion for this year alone.

The fund supports developing countries in limiting and treating preventable illnesses, in many regions leading causes of death – and once again on the rise.

0:55Ukraine calls for designation of Russia as terrorist state to save Zaporizhzhia nuclear plant

Ukraine calls for designation of Russia as terrorist state to save Zaporizhzhia nuclear plant – Sep 6, 2022

Trudeau is also planning to meet this week with Caribbean and other regional partners to focus on fostering sustainable growth in Haiti.

He’ll also see Joe Biden in person at an event for leaders hosted by the president and his wife _ their first face-to-face encounter since the U.S. abandoned a made-in-America scheme to sell more electric vehicles.

— With files from Dylan Robertson in Ottawa